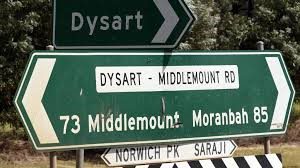 The following quote from 1983 provides an insight into town planning considerations for a proposed coal mining town in the Central Highlands of Queensland.

“Despite their growth rates, the great majority of these mining towns are unlikely to have the economic and social vitality of normal rural centres with similar populations. They are not much more than dormitory settlements, essentially suburbs without cities…For example, better roads could have made it quite feasible to amalgamate Moranbah and Dysart into a single town of some 20,000 to 25,000 people.” Source: Dr. Primod Sharma, University of Queensland, 1983.

We now know that Moranbah and to a lesser extent, Dysart have become important service hubs for a range of primary and secondary industries. Currently, both are more than just dormitory towns that service the mining industry and will most likely remain there for some time after coal mining has been and gone albeit somewhat smaller and less prosperous than in the past.

Positioning a mining town equidistantly between the proposed coal mines of Goonyella and Peak Downs appears to have made good sense, especially when the town was in close proximity to the Peak Downs Highway which already connected the coastal city of Mackay with the regional township of Clermont.

With the Utah Development Company (Utah) planning to develop further mines to the south of Peak Downs, commute distances from Moranbah would exceed 100km if there were no other towns in the region. A Utah feasibility study used a similar approach for Saraji and Norwich Park mines with the proposed town of Dysart being 25km north of Norwich Park and 25km south of Saraji with the Peak Downs mine being 50km north of Dysart, Moranbah a further 42km and Goonyella being another 27km. From end to end, the proposed chain of open-cut strip mines would ultimately end up being over 100km in length.

Using current population data (Census, 2016), Moranbah currently has 8,700 residents and Dysart 3,000. The largest theoretical population for a ‘mega’ mining town within the bounds of this section of the Isaac Regional Council boundary is 11,700 which is somewhat less than Dr. Sharma’s estimate of 20,000 to 25,000 residents even if the towns of Middlemount (pop. 1,800) and Tieri (pop. 1,100) were included. A study to assess the possible amalgamation of Dysart, Middlemount and Tieri is a separate topic in itself. In the pioneering days, mining township design was also based on the assumption that they were ‘one company’ towns so this was a further blow to the mega-mining town approach. e.g. Moranbah and Dysart (Utah/BHP/BMA) Middlemount (Capcoal) and Tieri (MIM/Xstrata).

Using a combination of assumptions from Dr. Sharma (above) and the Australian Census (2016) data, a single township in the region would, in theory, be located just south of Peak Downs mine, have a population of 11,700 residents (similar in size to the town of Emerald (pop. 13,500)) with mine workers commuting up to 70km to/from work on a regular basis.

From a commuting perspective, a centrally located mining town could result in better roads however, travel time savings would be minimal due to public highway speed restrictions.

Over time, a number of mines have opened within the Isaac Region of the central highlands, especially around Moranbah. On occasions, the development plans of mining companies weren’t well known or understood by other mining entities with little collaboration. Most worked under the assumption that development infrastructure costs were not shared facilities. This often led to less than optimal development outcomes for mines, townships and major infrastructure such as roads, railways, dams, and electricity reticulation.

The Central Highlands mega-mining town never came to fruition and there appears to be sound reasons for this. In hindsight, the distances between mines were just too great. A centralised approach inevitably resulting in winners and losers especially when it came to commuting long distances to and from work on a regular basis.